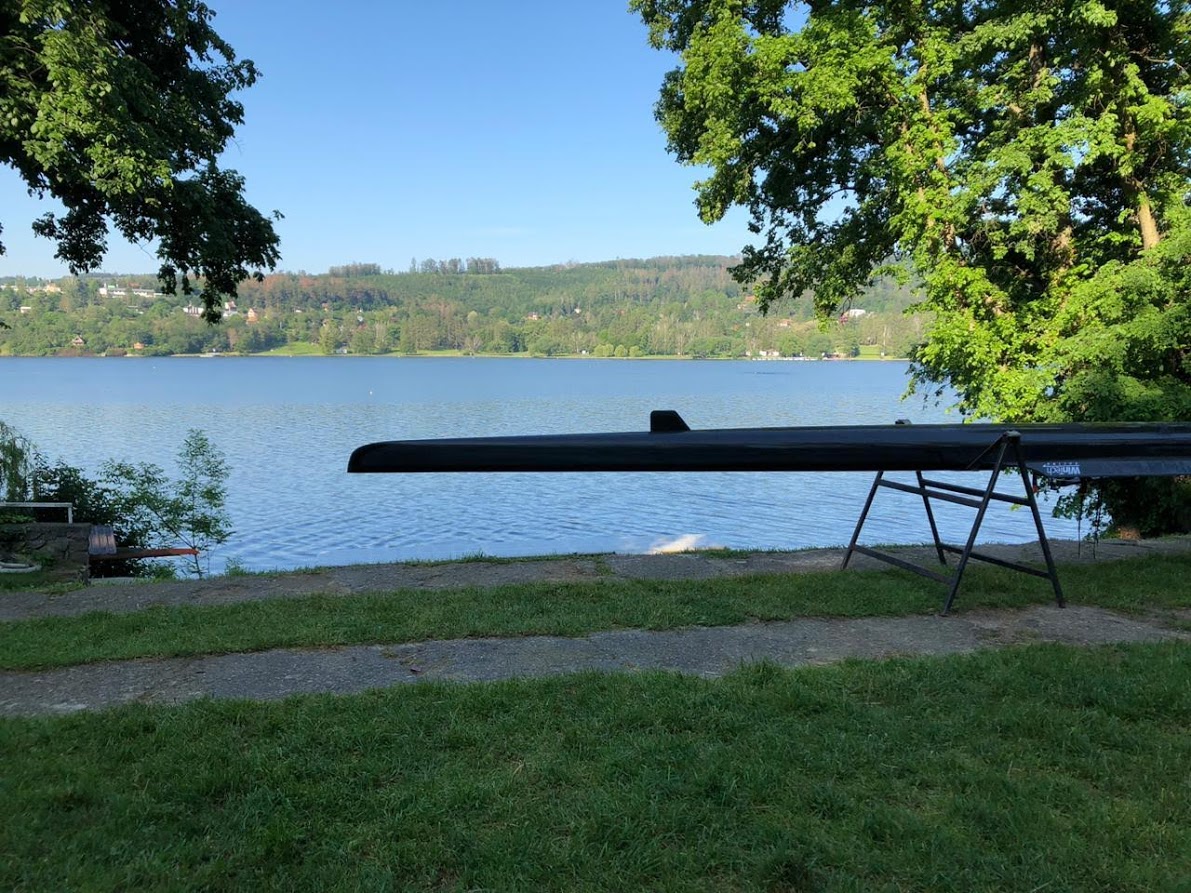 It was a great camp. Here is a summary of what we did.

After a quick meeting to go through the weather and some other camp related logistics on Sunday evening, Monday was the real start of the camp. Those who were renting boats did a thorough check of the equipment, including some last changes of shoes (of course we had some spare pairs). Those who brought their own boats used the time to get it ready to row.

Then it was time to try out the lake. Adam and Sander were taking the first videos, as well as giving some instructions about the traffic pattern. It was already getting hot.

After the row, we enjoyed Romana’s coffee and cake (and a pot of tea), analyzed the videos and discussed the necessary rigging changes. This first day is really necessary to get everybody set up correctly. No time for rowing data yet. After the coffee break, Adam and Sander were busy changing the rig for the participants. Then, we got onto the lake for a short row to test the boats again. We had to keep this row short because of the mid day heat.

The row was followed by a nice lunch, and a break of a few hours. At five we started the third row of the day (optional, of course). During the evening, Sander set up the first boats with NK Empower Oarlocks and Quiske pods.

On Tuesday morning’s workout, we did a special thing. We took advantage of the fact that the ferries are not running early in the morning, and we all rowed up to Veveří castle.

Of course, we took video and after we all returned to the club, we did a thorough analysis. By now, most participants know very well what they are working on.

After the coffee break, Adam took out a single and showed us a large variation of drills, from easy to very advanced. Then all participants went out for a short row to practice drills. After lunch, we did analysis of the first sets of data.

The third row of the day was an individual one, again. Some of us did a structured workout (1500m at 24 spm, followed by two series of four times 1 minute on, 1 minute off).

At 6pm, it was time to take the participants to Klentnice for a nice dinner in the Palava wine region, not too far from Brno. On Wednesday morning, it was rowing on video again. For the first time, the camp participants were showing off their improvements at higher stroke rate. The daily routine continued. We had coffee and cake, looked at the videos and at the data, and then it was time for a second outing.

Fatigue was setting in, and the number of participants for the third outing of the day dropped. Most of us preferred a massage or wellness treatment at the hotel (or perhaps just a beer).

In the evening, we had a special event. First a seminar on rowing data, and then watching fireworks, all the while tasting local Moravian wines. After watching the gorgeous sunset, we enjoyed the fireworks festival: Yep, the best place to watch the fireworks is from our dock.

On Thursday morning, the lake decided to show its choppier side. We decided to take the opportunity to row up to the castle again, but this time in coastal boats. The additional stability enabled us to do some of the more advanced drills without risking a swim. After the coffee break, we had a session about using data on the erg. The third day of the row was start practice for those of us who couldn’t get enough of rowing.

In the evening, we had a barbecue.

On the last day, we had everybody show off their best technique improvements on video. After the coffee break, some of us went on a second row of the day, but most of us were already closing up the camp. It had been great, and there had been enough great rowing.

Time to say goodbye, prepare the boats for transport, and Romana and Sander went out on a quick outing on the double.